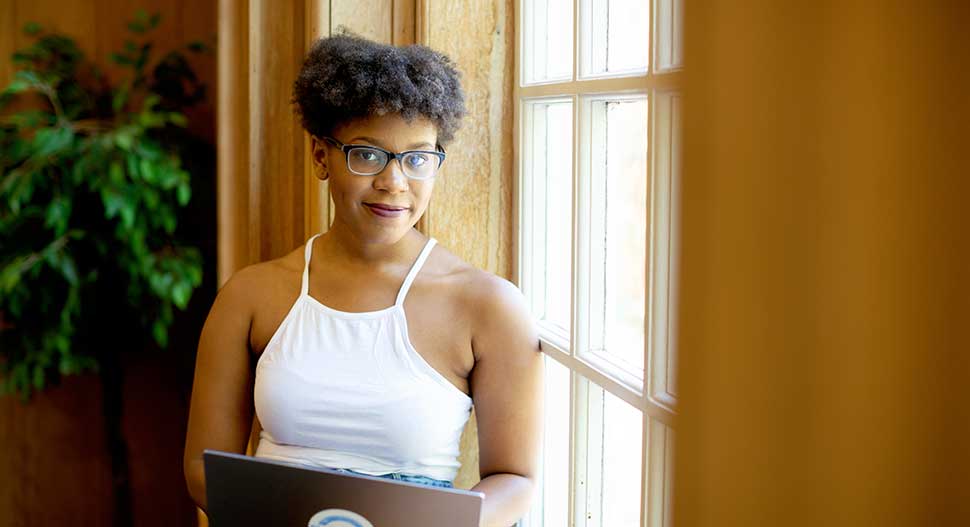 Aaron attends Wake Forest with the help of the Patricia H. and James J. Marino Scholarship and a Porter B. Byrum Scholarship.

Brianna Aaron (’22) has never been afraid of a challenge. In fact, the nationally ranked high school debater chose Wake Forest in part because it meant testing herself. She left the familiarity of the Northeast and the comfort of a mostly African American and Hispanic high school to become a Presidential Scholar in debate at Wake Forest.

Adjusting to college can be tough, and Aaron’s first days in the Forest weren’t always easy. But when she decided to take intentional steps to “put herself out there,” she rediscovered a fundamental truth of debate: Boundaries are meant to be tested.

“I feel like Wake Forest is making me uncomfortable with myself, but uncomfortable in a good way, where I can explore who I am. … I wanted to have friends outside of debate, so I’ve joined a multicultural sorority. I’m also part of First in the Forest, the ‘first generation’ organization. And I’ll be mentoring a middle school student every two weeks or so.”

Aaron has been able to pursue these opportunities because of significant financial support from the Patricia H. and James J. Marino Scholarship Fund and the Porter B. Byrum Scholarship Fund. She said, “Having the scholarships definitely made me come out of my comfort zone and explore new places. I can see a variety of different mindsets, engage with new people and have conversations with people I wouldn’t typically interact with.”

Aaron naturally gravitates toward the curriculum offered by the Department of Communication, and in the Wake Forest tradition of faculty mentorship, she has grown close to communication professors Jarrod Atchison, Amber Kelsie and Justin Green, who are also coaches for the debate team. “You’ll notice a lot of debate coaches are in the communication department just because they love rhetoric,” she said, laughing.

Although she won’t graduate until 2022, Aaron is already considering career options: “I have two pathways right now in my mind about what I want to do. It’s either enter academia or do nonprofit/activist work. Obviously, debate is a great hub or enclave for academic work. … The research that we do now is on a Ph.D. level, and we interact with a lot of academics. But if I choose to do activist/ nonprofit work, debate has helped in the sense that I’ve established a bunch of connections in the country and around the world.”

Whatever path Aaron chooses after she graduates, there is little doubt she will continue to test boundaries and “be uncomfortable in a good way.”