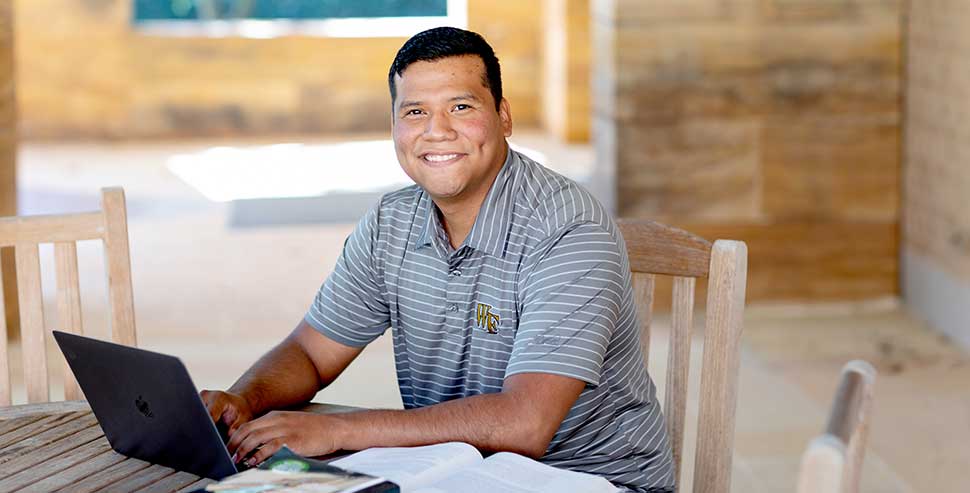 Martinez attends Wake Forest with the help of the Charles P. Rose, Jr. Scholarship and the Keith and Margaret Sharpe Scholarship.

Agustin Martinez (JD ’20) was in a high-level, lastminute, can’t-miss work meeting in 2017 when his phone rang. The aspiring law student had to agonize as the call — one he had been advised to expect and accept from a Wake Forest representative — meandered to voicemail.

That may be the only time that Martinez hasn’t been able to follow a plan.

Ultimately, it worked out. That tends to happen when you meld high aspirations, relentless work, strategic thinking and — in the case of the quickly returned phone call — philanthropy.

“I would love to say I’m here at law school only because of my efforts, but that would be completely disingenuous,” Martinez said. “Through scholarships, through letters of recommendation, through job opportunities, people have really helped me get to this point.”

The first of them was probably his father, a diligent, organized man who instilled those traits in his children. Martinez soon realized he had a love of learning, but he knew just as quickly that, as a firstgeneration college student, he would have to address the financial end of things himself.

So, in his final two undergraduate years at Marygrove College in Detroit, he held a full-time job at the region’s energy provider, located 10 miles from campus.

But in those two years and the 18 months that followed graduation, Martinez set aside enough money to cover his law school expenses above and beyond tuition and fees. He didn’t know exactly where he was going to pursue that next chapter of his education until that phone call informed him that he was in line for the Charles P. Rose, Jr. Scholarship, named for beloved and retiring professor Charley Rose. He was also awarded the Keith and Margaret Sharpe Scholarship. In combination with his personal savings, the scholarships would allow him to get a first-class legal education debt free.

Martinez immediately immersed himself in his studies. Although he had no experience in debate or mock trial work, he accepted a friend’s offer to join a Wake Forest team in an interscholastic competition in Chapel Hill, North Carolina. They won.

He took an even deeper dive in his second year. He served as a teaching assistant for the 1L Legal Writing class, one of Wake Forest’s nationally ranked specialties. He helped run a trial bar competition. He served as a study group leader in Constitutional Law. And he helped 1L students prepare the writing that would be used in selecting the staff of the school’s three journals.

Martinez has even planned his summers to ensure a diverse portfolio. In 2018, he worked in a firm in Minnesota. He split the summer of 2019 between another Minnesota firm and one in Greensboro, North Carolina. That way, he has experience in multiple jurisdictions. When his fiancée graduates from a nurse practitioner program, she may need to work in North Carolina at first.

In short, Martinez has it all under control, and he displays his appreciation for the Rose Scholarship by continuous work in his own classes, service to others and a big-picture view of his own future.

“The best advice I could give others is to have big goals,” he said. “I knew I wanted to go to law school back when I was in high school. I wasn’t sure if that was achievable, but I had a big goal. The other thing I started doing is networking. Find yourself mentors. That’s the best way to achieve these goals.”